It’s rather bizarre to end up writing someone’s break-up album for them, but that’s what I think I did for Chantal Acda. 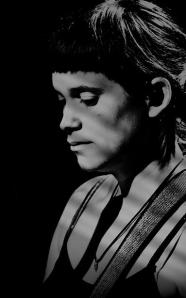 What was even more bizarre was that, when she (and her collaborator Craig Ward) put out this album – recorded under the name True Bypass – they called it Toby.

Chantal (born 1978) is an experienced musician, who is part of Isbells, mostly most of Sleepingdog and a variable proportion of Nu Nog Even Niet. She’s based in Belgium although born in Holland.

Chantal and I were put together by Danny Theuwis for an appearance at the M-ID zomer festival in the summer of 2010.

Here’s Chantal’s first email to me:

“Danny asked me to contact you for that performance in leuven…
i am a belgian musician and i really like your books.
So I guess the idea is to do something together…
and you also play guitar…does that mean we could do something
connected to your books musicwise? i am wondering about your ideas.
I do have an idea myself but first want to check it with you!”
.
My book I play the drums in a band called okay had come out in 2008, but I was still getting asked to do music-related things. This might have been due to the fact that, sometimes, people would misprint my biog to say something along the lines of ‘Toby has written eight novels and plays drums in a band called okay.’
.
Chantal’s idea was that we would write some songs together; my idea was that we could do cover versions of some of the songs I’d written with Emily Hall. This seemed easier all round – Chantal might be busy, might not like my lyrics, etc.
.
But Chantal was determined – and so, I sent her some words. And Chantal wrote a couple of lovely songs with them.
.
‘You Knew’ – about being the object of love-at-first sight – ended up on Toby. They even made a charming little video to accompany it.
.

The other song, called ‘No Longer’, hasn’t been officially recorded. But Chantal’s put the demo up on YouTube, just so you can listen to it: No Longer

My public performance a guitar in front of me, and a mic under my nose, have totalled four: two at the Port Eliot Festival, one in a fairly drunken Christmas singalong in a pub, and the one with Chantal I’m going to tell you about. 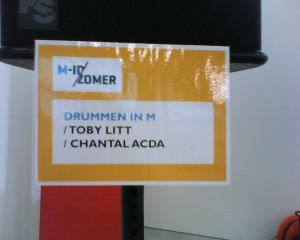 This took place in the M-ID zomer festival, but not in a concert hall or anywhere obvious like that.

Instead, Chantal and I performed in an art gallery exhibiting work by Angus Fairhurst, painter and sculptor (let’s, for once, not mention the lot of artists he’s usually associated with). Most memorably, we were a few feet away from a very sad-looking gorilla looking down at its lost arm.

Angus Fairhurst committed suicide in March 2008, and this show around us was a fairly big and impressive retrospective.

Most of our audience, I am sure, had come for the visuals rather than the grooves.

Chantal allowed me to fulfil one of my musical ambitions – to play a guitar solo. I assure you, it was not Yngwie Malmsteen. More the kind of thing that Pete Shelley might have knocked out in 1978.

But… Chantal liked the two songs we’d done enough to want to write more. So I started sending her lyrics – and, by trying to figure out where she was emotionally, I tried to write the songs she would have written, if she’d been able/wanted to.

What’s perhaps less bizarre but more satisfying is that Chantal has now released a brilliant solo album called Let Your Hands Be My Guide. It contains only one song with lyrics by me, ‘My Night’.

But the other songs are very special. Here is ‘Arms Up High’.

And especially the final song, ‘We Must Hold On’. This seems, to me, to have am immense emotional impact, despite being so minimal. It sounds like it could easily have starred on the Drive soundtrack, but that’s underselling it. It’s a cool electronic classic. You can listen to it on the Gizeh website.

Chantal has one of those voices that makes you feel loved. Her songs seem to be made up of the simplest elements, but the melodies can skim the top off your head. I feel lucky to have coincided with her, and to have done some breaking up on her behalf.

One thought on “Chantal Acda”