What can writers and teachers of Creative Writing learn from psychiatry, neuroscience, and other medical disciplines about the links between creativity and mental illness? 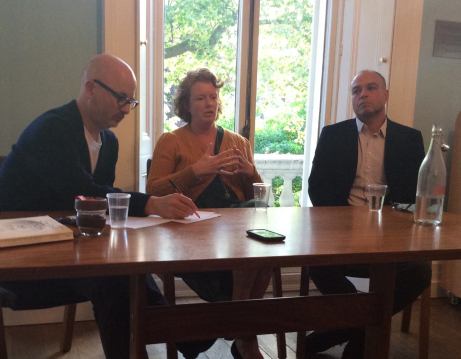 The podcast from the third Friday evening event, which took place on Friday 12th May 2017, can be listened to here:

Dr Suzanne O’Sullivan has been a consultant in neurology since 2004, first working at The Royal London Hospital and now at The National Hospital for Neurology and Neurosurgery. In that role she has developed an expertise in working with patients with psychogenic disorders alongside her work with those suffering with physical diseases such as epilepsy. Suzanne’s book about psychosomatic illness, It’s All in Your Head, won the Wellcome Book Prize in 2016. Her second book Brainstorm is due to be published in January 2018. She was awarded an MA in Creative Writing by Birkbeck University in 2016

Prof. Rodrigo A. Bressan is professor of psychiatry at the Federal University of Sao Paulo and visiting professor at the Institute of Psychiatry (King’s College London). After his PhD at KCL (2003) he went back to Brazil and lead an integrative neuroscience lab focused in early stages of mental disorders such as schizophrenia. He has written that, “Apart from hard science, I have been working with Jorge Assis who has lived experience of schizophrenia in lecturing, communicating psychiatry and writing books such as ‘Between Reason and Illusion – demystifying madness’. People learn much more from somebody with a mental disorders than from a professor. We have recently founded ‘Y-Mind’, a Brazilian foundation focused in youth mental health. I am currently spending a sabbatical year in London with the family studying adolescence in academia and at home.”

Toby Litt is a Senior Lecturer in Creative Writing at Birkbeck, University of London. A novelist and short-story writer, he is best-known for writing his books – from Adventures in Capitalism to (so far) Life-Like – in alphabetical order; he is currently working on the non-alphabetical, and non-fictional, Wrestliana. He is a Granta Best of Young British Novelist. He writes this blog.