When D.H.Lawrence writes of sport, in his essay ‘Education of the People’, he wants agon.

Set the boys one against the other like young bantam cocks. Let them fight. Let them hurt one another. Teach them again to fight with gloves and fists, egg them on, spur them on. Let it be fine balanced contest in skill and fierce pride. Egg them on, and look on the black eye and bloody nose as insignia of honour, like the Germans of old. (Phoenix, Heinemann, 1961, pg 657)

Lawrence was writing in 1920. He says appalling things, and he means to. Lawrence didn’t know how much of a fool he was soon going to sound. He is racist, not fascist. 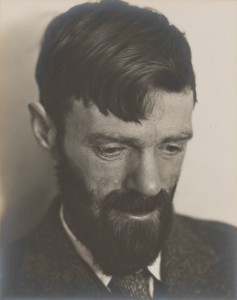 You can dismiss Lawrence whole, just as you can choose not to listen to Wagner – and that may be the right decision. But Lawrence can be read against himself. The distinctions he is making are very fine, although he wants his language to be as direct, combative as it can possibly be. He upholds martial values against military ones. He wants humankind to be able to rear its young without destroying them.

What young men are may be a social construct. If the biological entities they once were had been raised by wolves, they would be feral. Bring them up in a blank white cell and never speak to them, have them fed by robots, they would remain infantile. They would burble and play with their poo. With that I don’t disagree. But have them grow up in our social world, as my sons are doing, and most infants born with external male genitalia will become young men. And young men are a big problem for the world, perhaps the biggest, because they are clearly not satisfied with the occupations the developed world has to offer them. Desk jobs and service industry politeness will not do. For many complicated cultural reasons, proviso proviso, they want glory. They desire agon. They see nothing wrong with it, though there may be collateral damage. (I am generalizing, I know – I have to.) This holds true, this glory-thirst, for the young men who are running away from Luton and Marseilles to join the Islamic State; this holds for young men who are staying up past midnight playing Call of Duty; and for young men who join gangs, and who plot shootings. Yes, some young women join IS, too, some game and also gang. (Has one yet done a mass shooting?) But the structure of these conflicts, real and virtual, is not feminine.

And so Lawrence’s argument still has some force. What do we do with the young men – what do we allow the young men to do, do to one another – that will not end up killing us all?

Another Lawrence, the novelist Lawrence Norfolk, once said to me – after a trip to Bosnia, the peripheries of the civil war – ‘All young men should go to war, it’s just, none of them should die.’

Sport is D.H.Lawrence’s answer as, I’d say, it is America’s to the question of what to do with its young men – particularly those it generally views as most troubled and troublesome, its young black men. The alternative to crime, for young black men, is the sports scholarship. Watch the documentary Hoop Dreams, to see how stark their choice can sometimes be. If your young men have basketballs in their hands (America hopes) they are less likely to pick up guns. But it’s more than possible that they’ll go to the guns when the territory of the court is under threat.

The question is not whether young men will desire agon, the utmost struggle which defines and refines both combatants – it’s against whom they will choose to struggle?

Most drugs negate the desire for struggle; they are agon obliterators; that, it seems to me, is their main purpose. Heroin, LSD, crack, crystal meth – they take you out of it, it being struggle. When you’re this high, how silly winning seems. Drugs give you the win without the contest.

There are exceptions to this: coke makes you massively up for it, but coke simultaneously undermines your ability to hold back. A coked-up chess grandmaster would be an easy beat for one playing straight.

Thinking about this, I find myself in a strange position. For someone left-wing, for a Buddhist, I don’t seem to believe what I should believe. I think we need strong armed forces, to give young men who want to fight and who dream of killing somewhere legitimate to go. For similar reasons, and despite the inevitable brain damage and death, I think boxing is an absolutely necessary thing. I think violent video games may save the world. If they’re violent enough and immersive enough, and answer directly enough to the desire for agon and glory, they may be a solution to where young office-bound men go.

I think D.H.Lawrence would have preferred something a little more like Fight Club.