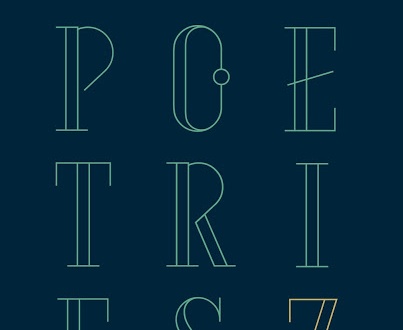 Today is the launch day of New Poetries 7, the occasional Carcanet anthology of new and not-established poets. I am very happy to be one of them.

Most of the poems by me included in the anthology are lyrical. But the opening few are from a sequence I wrote the day Donald Trump won the US Presidential Election. These are from the afternoon of that day. I wrote a lot. They are angry.

When you cross a bridge over a river

you can be definite about something –

but the insides, altered, leave an after-

shock of what, and what the fuck is happening.

It would be neat if one were like the other,

and the flow and bowels met in meaning

so that out of it come mother, father,

family, house, all subordinated into song.

Instead, I am borrowing several futures

that now is cancelled, and fairly brutal

was its ending – instead, I have my fears

and the headlong lull of going foetal.

I foresee a life’s work in this placement,

cadence that will fall unflatteringly

upon the judged, the camped jury, the wanted

and police force. Not harsh enough, they

are revealed to be; not sufficiently compliant

with pain-giving eloquence. We told a lie,

to no-one but ourselves, and now we can’t

Clanging down from less than heavens

there are some awoken ones, burial-mates,

drowners, who matter because of weakness

and sense-memory. Crows, crows and ravens,

the trees they engrave. Kestrels, kites,

Against futility, and the clasped hands

because on dapple-pattern we all can agree,

The whole scaffold is entirely purposeful,

and blood-soaked, as a legitimate viewpoint.

There is an act that forces whatever it will

Ease yourself into the cell, liberal,

you have prepared your own welcome

and furnished with defeats a red chamber.

This zone will always be comfortable,

and you know it to be somebody’s home.

The dead are never without number.

When even a piss against a tree has

greater significance than a new move

in a familiar opening in chess –

we come to a point, sadly, where we have

to admit to ourselves that what we meant

when we insisted upon the validity

of clear and beautiful restatement

was, in fact, a truth founded on a lie.

How argument was actually quadrille,

and laws were signed on Beatrice’s heart,

and even handshakes were made out of wood.

the men who kill,

there is a death behind the death of art,

and there is bad is caused by good.

Exhaustion was the first fault, loosed

by lovers of style, the demographic

that demanded to choose where it placed

not only itself but every heretic

that had ever failed to see the funny side;

and in magazines spread self-belief

as a gospel that could be flash-fried

and served with carpaccio of beef.

Meat was a fact, this could be granted,

but butchers were not invited in, and so

butchers bowing their heads went to the lake

of all the blood they ever spilled, and counted

waves as they came in, then turned to go,

or rather turned to come back.

Self-accusation will become the mode

adopted by the mortgage-paid, the hobby-

rich, the baked old, when the mistake they made

There will be an aesthetique du mal

resurgent in the shires, years afterwards,

and I may be long ago cremated

but there is nothing I can do but feel,

no purpose beyond ordering these words

to say: Apologists are ever hated.