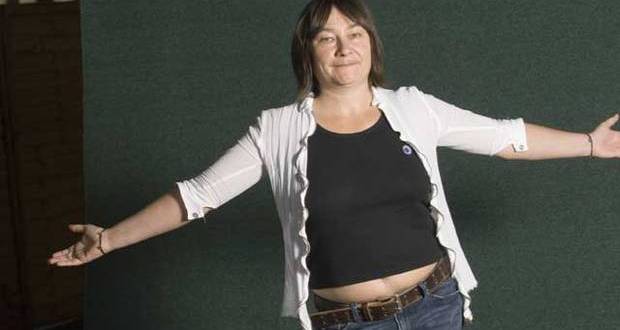 A kill your darling from Wrestliana. Written a while ago.

I miss Ali Smith. We edited an anthology together. We used to have the same publisher. Yesterday, searching for something else, I saw she was up for another prize. There was a photo of her, from The Independent. 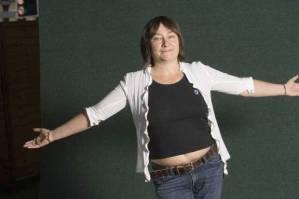 She stands, arms spread, as if caught halfway through her version of ‘Singin’ in the Rain’. I missed her very acutely, at that moment, and wanted to talk to the photograph. It seemed an example of right mind, correct attitude.

I worry too much, I know, about being or making myself likeable (on the page, off). Ali, by her pose, says,

She’s in a cheesecloth shirt, her tummy is showing and isn’t tiny, her jeans are rumpled, she could just have stepped away from her desk. (When I have my photo taken, I dress up.) There’s no mystique, she’s saying – and saying it to girls out there who might want to be writers, like her. Be honest, and let people make up their own minds. Even so, as her Gene Kelly stance asserts, it is performative. Dressing up or dressing down – it’s all drag, darling. Don’t forget it, and don’t let anyone else forget it.

As I couldn’t talk to Ali, because she was just a photograph on my screen, I printed her out and put her up on my big green baize noticeboard; and promised myself I would email her. Ali gives good advice and, as her wingspan here suggests, the best hugs. People are drawn to confide in her. Wisely. When we taught an Arvon course together (my first, Lumb Bank – in Yorkshire, near Sylvia Plath’s grave), we had a pow-wow after the first tutorial session. We were there to help the attendees write better short stories.

‘Whoa,’ I said, ‘one of my students spent all their time telling me what medication they were on.’

Ali smiled, she’d seen twelve people, she said. ‘I only talked about writing with two of them.’ The others had all inexorably been called to confide personal stuff. Some may even have been lucky enough to be hugged.

A very wise woman, Ali Smith. A woman of the sort the world very much needs.