I wrote this for a panel event at Birkbeck College. The brief was to write about ‘A Book that Change my Life (Involving Critical Theory)’. It was intended for the MPhil and PhD students attending, but is about how early work relates to completed work, within individual projects but also within lives and oeuvres. If you wanted to read something exceptional on this subject, though not necessarily right, have a look at Maurice Merleau-Ponty’s essay ‘Cezanne’s Doubt’. 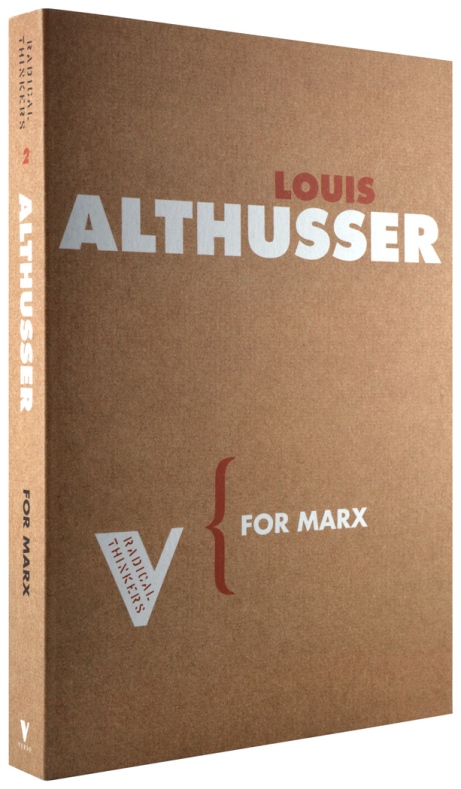 I’ll start by quoting. This is from the final paragraph of Louis Althusser’s ‘On the Young Marx’, pg 85-86

..if we are prepared to stand back a little from Marx’s discovery so that we can see that he founded a new scientific discipline and that this emergence itself was analogous to all the great scientific discoveries of history, we must also agree that no great discovery has ever been made without bringing to light a new object or a new domain, without a new horizon of meaning appearing, a new land in which the old images and myths have been abolished – but at the same time the inventor of this new world must of absolute necessity have prepared his intelligence in the old forms themselves, he must have learnt and practised them, and by criticizing them formed a taste for and learnt the art of manipulating abstract forms in general, without which familiarity he could never have conceived new ones with which to think the new object. In the general context of the human development which may be said to make urgent, if not inevitable, all great human discoveries, the individual who makes himself the author of one of them is of necessity in the paradoxical situation of having to learn the way of saying what he is going to discover in the very way he must forget.

This – because I can’t see how it isn’t in some way based upon it, rather than just alluding to it – will allow me to quote from the single book that most changed my life – the Everyman Library edition of The Poems of Keats, which I bought in Pemberton’s second-hand Bookshop in Bedford when I was fifteen years-old. Althusser figures Marx just as Keats figures Cortez in his sonnet ‘On First Looking into Chapman’s Homer’:

Much have I travell’d in the realms of gold

And many goodly states and kingdoms seen ;

Round many western islands have I been

Which bards in fealty to Apollo hold.

Oft of one wide expanse had I been told

That deep-brow’d Homer ruled as his demesne ;

Yet never did I breathe its pure serene

Till I heard Chapman speak out loud and bold :

Then felt I like some watcher of the skies

When a new planet swims into his ken ;

He stared at the Pacific—and all his men

Looked at each other with a wild surmise—

Silent, upon a peak in Darien.

Althusser also, I think, is rewriting a Marxist idea within what seems – when put alongside Keats – an idiom that is gendered (for both writers, the discoverer is resolutely ‘he’), colonial, and romantic. In the first Volume of Capital, writing of ideology, Marx wrote:

The forms of appearance are reproduced directly and spontaneously, as current and usual modes of thought; the essential relation must first be discovered by science. Classical political economy stumbles approximately onto the true state of affairs, but without consciously formulating it. It is unable to do this as long as it stays within its bourgeois skin.

There is a great difference between Marx’s stumbling approximately onto the true state of affairs and Althusser’s and Keat’s discovering or conjuring a new ocean or a new planet. If we are thinking of engaging in the work of de-colonization, these are all vital and marvellously questionable and deeply self-incriminating texts.

I’m not going to defend choosing Althusser. It may be indefensible – For Marx is the text of a man who ended up strangling his wife, being declared insane, spending three years in a psychiatric hospital, coming out and writing a memoir about the murder. Should it therefore be ignored? In my opinion, no. I think it is if not essential then lucky that some of the thinkers who dominate contemporary thought – Nietzsche for his supposed anticipation of fascism and Heidegger for his definite espousal of Nazism – are utterly tainted, deeply questionable. If they were completely ‘clean’ and ‘nice’, wouldn’t we be tempted to treat them too worshipfully – as the Victorians treated Thomas Carlyle? Doesn’t their taintedness enforce a critical response to the basis of their critical thought? We can’t just read the good guys.

Reading Keats made me want to be a poet; from my failure to be a poet came the desire to be a writer of some sort; and from my reading of the Modernists came the desire to be a writer who made it new. In order to do this, I felt – whilst at university and ever since – that I needed two main things: first, I needed to get into my mind and eyes and bones the most essential examples of what had already been done; second, I needed to change who I was, in order to become someone capable of perceiving and making new stuff. In Althusser’s words, ‘the individual who makes himself the author’.

A PhD, in the definition I still hold to (when I’m acting as External Examiner, as I’ve done a few times now) is ‘a significant original contribution to knowledge’.

When I began wanting to write, I felt insignificant and unoriginal – I felt I could only, maybe, after engaging for a long time in T.S.Eliot’s ‘great labour’, stand the slightest chance of making a contribution – and as far as knowledge went, that was what other older or dead writers had and I entirely lacked.

I’m assuming you might feel something like the same thing (in reference to a significant original contribution to knowledge).

Why is Althusser’s For Marx important to me, then? And how might it be useful for you?

For Marx is a formative book for me, although I discovered it quite late. Perhaps fifteen years ago. Althusser’s argument about Young Marx’s development into the Marx of Capital seemed to me, when I read it, perhaps the most brilliant exposition of critical thinking that I had ever encountered. It made me finally understand what critical thinking is.

More than this, to see all those complex questions of self-relexivity and self-origin stated so clearly, and not on my own territory was a great relief – and was something I could go back to when I wanted to think about thinking about thinking or, in Marxist terms, reconciling theory and practice into a praxis. In order to write, I needed to write in a way that didn’t contradict what I was writing. (It’s easy to decide on a vivid thesis, then literally execute it.)

Critical thinking is, as Althusser says, thinking that is ‘capable of accounting for itself, by taking itself as its own object’.

I don’t write philosophy. The thinking I do has – most of the time – to manifest itself through fiction. It’s only in the last thing I’ve published, a novel called Patience, that I feel I’ve managed to get some of this thought into shape for more than a few pages.

(This may not be where you are. Audre Lorde, in ‘The Master’s Tools Will Never Dismantle the Master’s House’, asked, ‘What does it mean when the tools of a racist patriarchy are used to examine the fruits of that same patriarchy?’ Whether or not Althusser is still employable, I leave to you.)

To demonstrate where I find him close to home, I’m going to come in half way through a key paragraph; one that should be read and reread in its entirety. It’s from the end of  ‘Introduction: Today’”

..that the precondition of a reading of Marx is a Marxist theory of the differential nature of theoretical formations and their history, that is, a theory of epistemological history, which is Marxist philosophy itself; that this operation in itself constitutes an indispensible circle in which the application of Marxist theory to Marx himself appears to be the absolute precondition of an understanding of Marx and at the same time as the precondition even of the constitution and development of Marxist philosophy, so much is clear. But the circle implied by this operation is, like all circles of this kind, simply the dialectical circle of the question asked of an object as to its nature, on the basis of a theoretical problematic which in putting its object to the test puts itself to the test of its object. That Marxism can and must itself be the object of the epistemological question, that this epistemological question can only be asked as a function of the Marxist theoretical problematic, that is necessity itself for a theory which defines itself dialectically, not merely as a science of history (historical materialism) but also and simultaneously as a philosophy, a philosophy that is capable of accounting for the nature of theoretical formations and their history, and therefore capable of accounting for itself, by taking itself as its own object.

For almost all of this long paragraph, I would say, ‘Marxist theory’ could be replaced by ‘Feminist theory’ or ‘Queer theory’ – for example, ‘that the precondition of a reading of Queer theory is a Queer theory of the differential nature of theoretical formations and their history, that is, a Queer theory of epistemological history, which is Queer philosophy itself’. If there are some stresses within this as a statement, I think they are useful in revealing the ambitions and limits of non-Marxist philosophies.

As a final point, where this has led me is into a wider reading of self-origins as they relate to originality. I have attached a bibliography to the sheet of quotes, which you might find useful. But the main place this line of inquiry has led me, the main questionable books I have been concentrating on – the main examples I can give of this kind of thinking-in-writing by a live human subject for a life human subject, the form of which is not in contradiction to, or merely an ex post facto codification of, the liveness of its thought is Heidegger’s Contributions to Philosophy [of the Event] and Dogens’ Treasury of the True Dharma Eye.